all I can say after watching this game on the digipak is , we were whitches hats today, we have a lot of fringe players that do not get in to get the ball, and we desperately need a full forward, a focal point 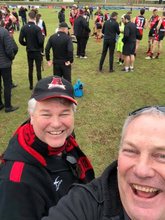 To be honest, a team with 21 AFL listed players should win against a SANFL team depleted of experienced players (no Schmidt, Webb, Porps, Silverlock, Wilson etc) by 20 odd goals. I thought the team showed a bit of heart and pride to play the game out and continue to score in the final quarter.

Result says more about the competition than anything. Maybe magpies crows grand final may be what people need to see to realise clubs sold their souls when allowing them in

I went to the game and a 20 goal loss was what I expected.

The Magpies had 21 AFL players and their Captain played ressies.

I agree with 'Blood Bath' regarding the number of experienced players
we had out injured, however even with those players available we are
deficent in so many areas.
We simply don't have the personnel to be competitive right now.

Well we are zip and 9....
9 games to go. We need to show something after the bye.
Can't say much about today.. But there needs to be a response against North in 2 weeks time at home.
It is a chance for us to grab a win.
A winless season is looking like a possibility.....

Oldfella wrote:Whilst not disagreeing it is important to  remember who and the quality of the team we were playing

Yes 21 goals is a big loss no question no arguement but there must be a rational assessment of the task posed to the team in todays game. Few of long term supporters i have spoken to privately in last week expected us to lose by less than 20 goals if the power reserves turned up to play serious and not play around with team placements.

Bloodbath and Lachlan comments are in line with my thoughts

The power reserves are probably the form team at the moment with basically a full squad of fit quality players who are (in last couple of weeks) playing as a team. They flogged south the other week even after thier coach changed basically every position of the team in second half to look at players potential in other areas

As always respect your opinion

I understand what you are saying, I too expected a loss but hoped for the best. I will never just accept a 21 goal loss and just 'move on'.

Wolf pack quote "there needs to be a response against North in 2 weeks time at home".

A win is the only response that is acceptable!

brodlach wrote:I understand what you are saying, I too expected a loss but hoped for the best.  I will never just accept a 21 goal loss and just 'move on'.

I agree with brodlach that, regardless of the opposition, a 20 goal loss is never acceptable.

We have to be better than that.

We have a lot of players who are not up to League standard. Some are inexperienced and are worth persevering with because they could be League players. (Sadly we don't have a core of in-form, experienced players to carry these kids along and still win games.) But some aren't showing enough.

Today, I thought none of our tall players controlled the air, with the exception of Keough who was possibly our best. In fact apart from him none of the talls contributed much at all, although McPherson did okay in ruck contests. Many of our mids and flankers didn't work hard enough. There wasn't enough serious chasing, even in the first quarter, and our tackling was often pathetic. Some players lack the intensity to play at this level.

Our kicking, and even our handballing at times, remains our achilles heel. Although just getting it today was a big problem.
When your 16th consecutive loss is by more than 20 goals I don't know how anyone is expected to believe that we are "moving in the right direction".

Lee and team. It pains me to say this but please make a coaching change now. I will be forever grateful to MM for 2015 but for the sake of the supporters, the board has to show a commitment to change now. It is clear things are getting worse and giving another head coach a try now may prove a great audition for an improved 2018.

What does Hugh Haysman have to do to get a game.Best player for 3 games in row in the reserves. Should be in the team .

This game at Alberton, against a team of 21 professional footballers, saw us exposed for what we are: a team that tries hard but lacks the skills to compete against the very best. Standing in the sun on a perfect day for footy it was embarrassing to be a Westies supporter.

You simply cannot afford to make mistakes against a team as good as Port Power Reserves. We can just about get away with our fumbles and poor decisions when playing 3 or 4 of the lesser SANFL teams but when we come up against real class we are punished for our weaknesses.

Pre-season for 2018 needs to start now. That means a concentration on skill improvement. Our tackling is intense but lacking in technique – we must pin the arms to stop the handball. At Alberton we were handball happy and were constantly undone by our poor execution, with both hand and foot. Don’t handball to a player under pressure, or a player standing next to you and don’t handball to the player’s feet. It all seems so easy from the other side of the fence.

We need a specialised skills coach. Whatever is being taught now is not working. We have improved slightly from last year but seem to have levelled off to the point where we face the rest of the season with little hope.

Let’s move on from this poor performance and regroup for North in 2 weeks.

Well done to Kenny Karpany for his fearless tackling. Keough probably our best, he certainly saw a lot of the ball at full back – most of the time sailing over his head. Stevens again was good, despite being knocked from pillar to post. Schiller worked hard.

Westies should never complain when we get belted by the AFL reserves. It was us who led the charge to let them in to our league.
Who will ever forget the kerb side media interview on TV of our then president stating that the meeting about to happen will decide this issue.
Ofcourse the ok was given by all but 2 of the clubs in the SANFL. I along with many of the clubs supporters was horrified that such a decision could be made with no consultation or vote by the membership.
Last Sunday we got what we deserve.
I feel for the players though. Lambs to the slaughter.

i totally agree with taaars as a member for a lot of years we as members must have rights which we were not given the right to vote on . even if our voice was not carried at least we voiced it. i know heichrachy will say in hindsight we might have got it wrong but in long term we are very much in danger of non excistence along with other sanfl clubs.even myself will go to all home games but pick and choose other matches which i never did before irspective of distance. i follow a afl club but my passion and enjoyment is west.as we Are a old supporter base club we need afl funding as they need our junior programs.and yes i will be there next match and do not question our players endevour.this is first post from me for a long time as do not want to be too negative.good health to all as we have lost a few very good supporters.go the bloods