Thoughts for this game?

In   Fielke, Snelling, Harts and someone close to Mitchell.

Where can we get tickets to the game Sunday iga or at the gate.

Surely Mitchell goes up to the AFL after his 36 possession game yesterday.
Wishful thinking

Not sure we have someone to go with him. He is such a running machine. Moore, Stewart and Summerton go alright too.
I would start Tuck in the middle and Porplyzia forward this week.

merrick wrote:Where can we get tickets to the game Sunday iga or at the gate.

At the gate merrick. 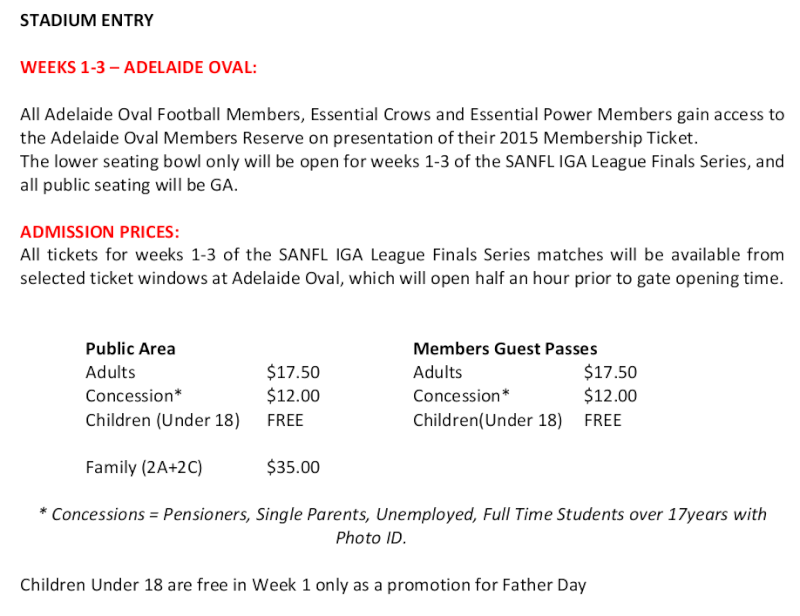 Time for Westies to harden up and beat Port and not settle for another loss due to AFL players playing. They have 3 or 4 very good players and the rest are no better than ours. I would back Schmidt, Beechy, Fielkes and Harts against any of their playing group. Don't play sick or injured players and we can win well.

Under qualification rules revised by the SANFL this year, the eligibility of AFL players to play in the League’s major round require a player to have played the majority of his season in the state competition, including three games after June 30.

At the end of the 2015 minor round, the following players meet those criteria:

All of the club’s SANFL-contracted players are eligible to play finals as long as they have played in at least three League or reserves-grade games.

All 15 contracted Magpies will be available to play:

From your list Butcher, Amon and Gray all played against the
Gold Coast Suns and I would expect them all to play against Freo
This week. Therefore their team this week will be very similar
To the one we played yesterday

According to this site... http://www.portadelaidefc.com.au/news/2015-08-31/sanfl-finals-who-qualifies

merrick wrote:Where can we get tickets to the game Sunday iga or at the gate.

At the gate merrick.

Whats the transaction charge?
And why favour AFL members and not SANFL members at SANFL finals?

From your list Butcher, Amon and Gray all played against the
Gold Coast Suns and I would expect them all to play against Freo
This week. Therefore their team this week will be very similar
To the one we played yesterday

Yes, this really is the issue. Port are morally obliged to pick their best team to play against Freo. If they don't select Butcher, Amon and Gray then the experiment of the Reserves in the SANFL competition would surely be called into question. Given the spirit of the agreement it would seem only fair that the Crows and Port be morally bound to pick the best AFL team possible even when they don't make the finals. I don't think it is valid to argue that AFL listed players who may otherwise have qualified be returned to the SANFL or not play AFL just so they can play in these finals. Some may argue that it is unfair on these players if they 'miss out' but after all, they are AFL listed players. The purpose of having reserves teams in the SANFL is so AFL listed players can play at the highest possible level. That is the sole purpose.
If either of the reserves teams win a premiership, or even worse continue to win them, I can't see how this is going to benefit the SANFL competition. The SANFL clubs are bound by a salary cap which is a fraction of the AFL cap. SANFL players are not full time professionals who can devote endless hours to training and rehab. The integrity of the competition is at risk if the AFL clubs don't fulfill their moral obligations. The criteria for player eligibility will never cover all the bases. I don't think anyone could complain if we came up against the same PAFC team that defeated us on Sunday.

Well another year of a tainted final series coming up.The club with no salary cap v The poor SANFL cousin.

bruce cameron wrote:
If either of the reserves teams win a premiership, or even worse continue to win them, I can't see how this is going to benefit the SANFL competition.

This is the point that always interested me. In interviews prior to their entry, various SANFL spokespersons said they would have to "look into it" if the AFL reserve teams dominate the SANFL comp. I was, and still am, not bothered by their entry...strengthening a comp. is always good. But I was always worried about the SANFL seemingly having no contingency plan if "trouble" arose.

This post is about how we are going to beat port, not about crying because they are in. The bays got within 1 point of them a couple of weeks ago. We have a good team that is more than capable of winning on Sunday.

Of course we can win.
We are good enough.
Centre clearances are the key.
Ports midfield is a worry but we have a good midfield too.
If Tucky's corky is ok, put him in the square and let's put some physical pressure on their mids.
Need more from Willits and Hardy around the ground i.e Take some big contested marks.
Start Porplyzia forward, even if just for 20 mins. He is a great goal kicker.
We have the forwards to put their defence under real pressure.