THE LACK OF EFFORT was so obvious at the ground yesterday and it was the same as last week.
The want for the contest was very poor, we just don’t want to work hard enough. COMMITMENT doesn’t take skill.

Duvall outstanding and Stevens was good playing his first game back.

I have been extremely disappointed so far this year, we refuse to move the ball quickly that’s because we aren’t prepared to run take a handball or run to create.
Our ball movement has been so slow, we don’t have the personnel to play that style.
Our tall’s are simply not good enough.

May came off in the first few minutes with a hamstring issue and Keough hurst his knee early in the first qrt.

I think Anderson has to come in at least he can tackle.
Fejo was also very good in the ressies as was Allan who should replace Maguire who needs to find some form.

We don’t have any tall’s in the ressies who are ready to play league.

I hope Rana is available next week as I would play him FF and drop Ellem.
I would also drop Koster and bring in Steele.

One thing we need to change up is our strategy when bringing the ball back in after a behind has been scored. Every time we just kick long to a pack near the boundary, and we give up possession. We'e not good enough at stoppages to give up possession that readily. It was a rare event yesterday to see us move the ball from defence to attack.

I accompanied with "improved enormously".
I saw a favourable structural change in the first 2 games, conducted with semi-competence where further experience in such a format looked encouraging. Yesterday I saw none of that because the skill level didn't meet a minimum threshold, not even close.
The only thing that connects all 3 games is the WA mens league team. 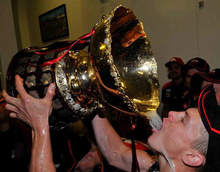