It appears to be fixed now Aldo.

Or they could read my book

You’ve got a book?

Yes, despite it being given the Fawlty Towers 'don't mention the war' treatment by some at the Club (nothing political, of course

I know you think it's strange an author would continue to promote it, but many, many West supporters around Australia have contacted me to express their enjoyment and historians have given it great reviews.

Keep chipping away, you'll be getting into stalking territory soon.

I can recall the effect Murray Weideman had on our team when he arrived.  We seemed to stand taller and he was a charismatic leader, who could definitely play.

His coaching took us from the depths of the years after the Kerley sacking to being a finals team and very competitive.

We lacked success for years before he arrived and for years after he left coaching.  He still served the club in other capacities later and was a revered figure at the Club.

It is with great sadness to inform you of the passing of a true West Adelaide legend.

Brian Keith Faehse who passed away peacefully on Sunday 21st March, 2021 at 96 tears old after a short illness, which he battled with the same grit & determination that he demonstrated in all of his 222 games for West Adelaide, a club record on his retirement from the game.

Coming from the Eyre Peninsula town of Cummins, Brian made his first appearance for West Adelaide in the Senior Colts in 1943 whilst serving his apprenticeship as an Electrical Engineer.

Playing his first game in 1944, for what was then West-Glenelg during WW2, he would break his ankle in his 7th game which unfortunately ended his season.

Brian didn’t miss too many games through injury, playing 128 consecutively, earning him the nickname Ironman.

He represented the State on 19 occasions.

The player races to enter the field at the old Adelaide Oval were a result of Brian taking on the Port Adelaide supporters after the siren at the halftime break of the 1954 Grand Final. At the time players had to leave the oval through the crowd without any protection.

As a result, the SANFL decided to install the races in the off season to protect the players entering and leaving the field. Ironically, Brian was the first to use the new players’ race, when in 1955 he led West Adelaide onto the field against Norwood.

Anyone who visits Richmond Oval (currently Hisense Stadium) will have seen the B.K. Faehse

Stand, which was renamed the Brian Faehse Stand in late 2020 on his personal request.

part of the sub-committee which started the acquisition & development of Richmond Oval.

He organised the plan of the oval, arranged earthmoving equipment & clearing of the land, in addition to digging the trenches for the watering system and the laying of the turf for the oval. He banded together past & present players, officials & supporters for the installation.

Unfortunately, he had retired by the time the first game was played at Richmond Oval in 1958.

The great Fos Williams said on Brian’s retirement from the game after the 1956 season, ’I’ve never met a better teammate or a more ferocious & determined opponent’

Apart from football, Brian was an accomplished golfer playing for Glenelg Golf Club representing them in the Simpson Cup.

Brian will be remembered as our 1947 Premiership Player, Captain, Coach and a member of our management committee, but most of all as a gentleman.

If a football club ever needed a template on which to build a culture, it would well benefit to use the example of the way Brian Faehse conducted himself on & off the field in life & his time at The West Adelaide Football Club.

Our thoughts are with Brian’s family, friends and especially his long-time friend & companion Janet who has given exemplary care to Brian through his illness.

From email I received today

My football friends we lost a great West Adelaide person and a close friend yesterday
West Adelaide Life Member Malcolm  McCracken.
08.07.1935 - 18.06.2021
Loving husband of Barbara for almost 65 years. Cherished father and father-in-law of Geoff and Enrica, Jenny, Bruce, Heather and Brenton. Proud grandfather of Joshua, James and Samantha, Naomi and Jacob, Ben and Sarah, Dominic, Dani. Loved great-grandfather of 7.
Malcolm gave approximately 47 years of service to the club in various roles as a volunteer within the football rooms --- some but not all roles undertaken include Senior & Deputy League Property Steward, Room Steward, Room security and Colour Steward. 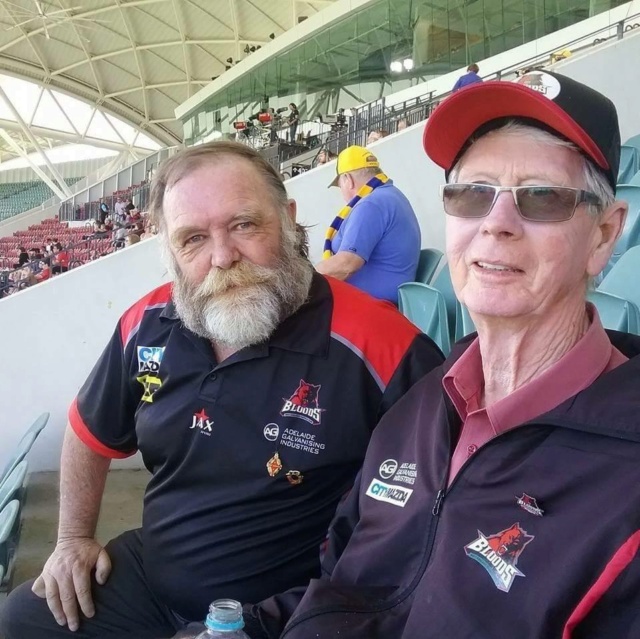 Malcolm was the doorman when I started following Westies when I was about 6 years old. He stopped me getting into the players rooms before and after games so many times (which was his job), before getting the all clear to let people in. We'd often strike up a bit of a conversation, and he was usually fairly critical of the umpires. With good reason I reckon. He seemed to be the doorman forever. A lifetime of voluntary service. I hope he gets past the doorman at the pearly gates. RIP Malcolm.

Good to see the Club acknowledging the passing of past player, Ken Thorsen, after the disgraceful decision of the previous CEO to not acknowledge Andrew Gribble last year.

Shocked and saddened to hear of the passing of Kerry Carn, a great bloke and wonderful West Adelaide volunteer.


The West Adelaide football Club, Westonian's, WAFC History Group & WAFC Past Players & Officials, morn the sad & sudden loss of Kerry Carn after a short illness.
Kerry Carn will be always be remembered as a hard-working person a genuine good bloke who was worth his weight in gold on any committee he was part of.
If set a task you knew that it would be done, without any fuss & completed perfectly.
He loved his Bloods with a fierce passion & heaven help any person who spoke poorly of them.
A member of the Westonian’s & their treasurer for 25 years, he was rightly awarded the honour of Club & Westonian life membership.
He was also a foundation member of the WAFC history group.
Speaking to many club people, the feeling of loss is enormous.
Kerry will be sadly missed.

Our sincere condolences & thoughts are with Sue the Carn family & all of Kerry's many friends.

I attended Kerry's funeral this afternoon along with family, friends & many West Adelaide people.

I always remember Kerry telling me a few years ago that he had decided to retire as Westonians Secretary after a long stint. I asked him if he would reconsider, as the Club was facing a tough battle at the time.

He said 'yes, if the Club needs me to stay'.

A gentleman and a lovely man.

Just to advise the passing of John Nathan, former timekeeper and father of Luke.

A lovely man and sincere condolences to his family.

It always is the good guys and Jon was definitely a good guy.

In lieu of floral tributes, a donation to Meals on Wheels Inc.
Would be appreciated. Envelopes will be available at the Chapel.

For further details please visit the Alfred James Marion website.
Live streaming will be available on Monday 17th January at 3:00pm.
Please click on the link below.

John had a tremendous love for the West Adelaide Football Club. In 1995 John was timekeeper for the Under 17’s while his son Luke played under Peter Meuret. His involvement continued in 1996 when he became the reserves timekeeper. In 2003 he took over as league timekeeper, a roll he served in until 2017.

John Nathan passed away peacefully Thursday 6th January after a long illness. He was 76.

Our sincere condolences & thoughts go out to the Nathan family & friends.

The funeral service for John Nathan will be held on Monday January 17th at 3:00pm.

The Funeral Service will be conducted in its entirety at:
Alfred James Funeral Home
543 Marion Road
South Plympton

In lieu of floral tributes, a donation to Meals on Wheels Inc. would be appreciated. Envelopes will be available at the Chapel.

Live streaming will be available on Monday 17th January at 3:00pm.

Very sad to also advise the passing of Graham Grillett.

It is with great regret I inform you of the passing of Graham Grillett this morning, 11th January, 2021 age 81.

Graham was a West Adelaide Football Club Board member from 1981 to 1987 and again in 89.
In 1991 saw him as Assistant Property Steward & Reserves Boot Sprigger.

His great friend, Ricky Pink, believes he was an inaugural member of the BBQ team when it was first set up in the late 1970’s.
GG, as he was known to his mates around the club, was a much-loved member of our football community.
In more recent times we saw GG back behind the BBQ match day, not only serving up sausages and onions but a mouth full of
cheek to any of his mates who happen to pass by. Personally, I'm going to miss being loving referred to as “Hey you Little s***”.

Graham will always be remembered for his gravelly voice, dry wit, and sense of humour. He was a close mate. The front bar will be a bit quieter now.

We were lucky to have had GG in our lives.

Our thoughts are with Graham's family, Mo & his many friends.
Vale Graham Grillett.