Harts out and Hardy in.

I think Tucky will come in.

Tucky will come in but he doesnt replace a key defender if Harts doesnt come up.

Hardy to come in if Harts is out.
Milne to move into defence to cover for Hartlett.
Therefore Hardy will play as a key forward

Tuck to come in for Haysman.
Who has done ok without setting the world on fire

Haysman's running up and down the field breaking lines can't be underestimated. He was the most prepared to get back in defence and run hard forward against Centrals on the weekend. 16 Touches isn't a bad game either. I certainly would not drop him but then again, I wouldn't have dropped milne in the sturt game.... Glad I'm not a selector making the call on who comes in or out this week

If Hartlett misses, we don't really have anyone with the size to go with Obst. I'd guess Keogh would have to take him. That leaves Milne or Francis for the very dangerous (and strong) Shillabeer. Hartlett's potential absence does highlight a deficiency in our squad, unless Solly or Klemke can play that sort of role.

I would like to see Anderson ,Favretto,Middleton   come in to replace the State Lads
When ?????

Tucky will be back & I hope Middleton gets a go. His marking strength has been a feature in the past fortnight in the twos & he is a reliable kick for goal normally.

This would mean if Hartlett is not available perhaps Milney will have to go back to help Tommy Keough. I hope we don't but we may also have to use Francis in defence again to assist with the match ups on Norths big brigade if Middleton plays forward.

Let's hope it's not down there too often.

West Adelaide coach Mark Mickan has been forced to reshuffle his defence ahead of the clash with North at City Mazda Stadium on Saturday.
With key backman Adam Hartlett set to miss at least a fortnight with a hamstring strain, Mickan will likely use inexperienced pair Tom Keough and Aaron Francis in the defensive posts.
Strong-built midfielder Travis Tuck returns from his one-match suspension for striking Sturt’s John Greenslade in Round 4 while McDonald’s SA Under-18 squad member Jack Agostino resumes in the back pocket.
Utility Mason Middleton has been added to the extended interchange bench as cover at either end of the ground.

Shillabeer out for North helps us a lot.
Hartlett has gone from "TBA" to missing at least a fortnight. Given the lengths of time our guys seem to spend in rehab, I'll be happy to see him back this year.

Jimmy lucky to survive.Hope he returns to form one of my fav players.Photo of him with my Granddaughter Rosemary with F/Bloods daughter Ashlee the year of his Magarey medal. 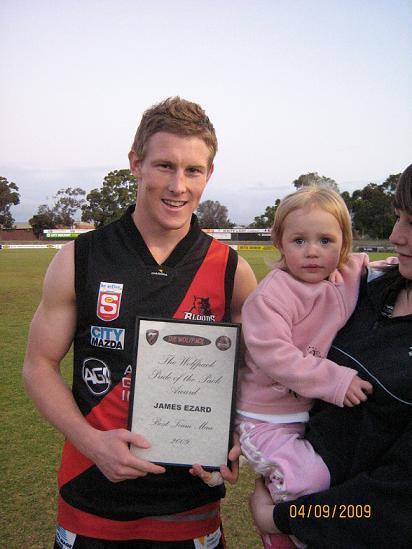 As far as i'm concerned - a season defining two weeks ahead.

We always struggle against North but on our home deck and with them struggling this year we really need this one.

Glenelg obviously we should beat.

That gives us a chance to be 5-1 with some of the tougher teams to come in subsequent weeks.

Craig being out is a big loss for them.

A fast start would be good to see, instead of taking 23 minutes to score our first goal. If several players who are frequent slow starters impose themselves early and often, that should do the trick.

Was at work so couldn't make the game. Shame.

Were we so good or North were bad? or both?

Great to see Nelson doing so well again. (in my opinion) He has been highly underrated and Webb over rated in times gone past. Again this is just my opinion.

Our first quarter lacked urgency to me, but the boys played good footy and dominated from then on.  I have to say that North were as bad as I've ever seen them.

Porps is the backbone of our team. Let's pray he stay's healthy.

I all the new players have been excellent so far

(snelling, haysman, wasley-black, francis, agostino, porps, willits,....)
And there are others who have stepped up from last year too.

The constant has been our fierce attack on every contest which has set the trend in each game including the Sturt game until 10 mins into the last qtr.

Apart from the obvious players we have had, a few unsung guys who have been consistently good IMO. All playing a role which has underpinned the rest Eg: Josh Schiller, Kane Stevens, Logan Hill, Tommy Keough & Erin Wasley-Black amongst others.

I am really buoyed by the evenness of our team at the moment plus we are getting through most games without major injuries apart from Webby & Harts. (Touch wood) This is obviously the result of a really strong pre-season campaign. Harts will be ready to go after a nice rest against North, Glenelg & the State game weekend plus it is great to see Justin Hardy getting through the Reserves games well. He is nearly ready to go.

Like today our next challenge is to make sure we beat Glenelg next week. It was great to hear our coach stressing to our boys after the game today that we must be ready for Glenelg as we owe them one from that deplorable effort late last year.

A good performance today against a very ordinary North outfit who were missing a few key players
I agree with everyone's comments that players such as Stevens ( who seems fitter) Schiller and Hill have been very good all year. They have taken their game to another level which is very important for us. Haysman played his best game today and Snelling and Francis were also good.
I thought Porps was again our best player. Thats two weeks in a row

We are winning games without a key forward however South,Norwood and Port are looming shortly and I think Hardy and Middleton will push for selection.
Travis Tuck has to be one of the best recruits for our club as well as the SANFL competition. I'm surprised he wasn't selected in the state squad

Really good effort against a insipid Norfy outfit. We have to do something about our slow starts though. Against the top sides if we do that you can shut the gate at 1/4 time the horse would have bolted. But will take the win. Reckon we can win our next 2 games,then the big test.

You can only play the players the opposition put out there.

We have been on the end of it in the past with a massive list of injuries (like late last year) so it doesn't concern me at all.